Restored, re-evaluated, and framed with a live orchestral arrangement of the original score and a performance by descendants of the indigenous cast 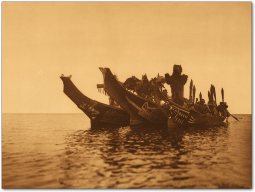 In 1914, famed photographer Edward S. Curtis (1868-1952) produced a melodramatic, silent film entitled In the Land of the Head Hunters. This was the first feature-length film to exclusively star Native North Americans (eight years before Robert Flaherty’s Nanook of the North). An epic story of love and war set before European contact, it featured non-professional actors from Kwakwaka’wakw (Kwakiutl) communities in British Columbia—a people already famous then for their spectacular visual culture and performances. The film had gala openings in New York and Seattle in December 1914, where it was accompanied by a live orchestral score composed by John J. Braham (1848-1919), best known for his work with Gilbert and Sullivan. Curtis supplied Braham with c.1910 wax-cylinder recordings of Kwakwaka’wakw songs; despite advertising claims, however, little if any of this source material made it into the score. Critics wrote in rapturous terms about the power and beauty of the film, the Seattle Sun calling it a “great production—like a string of carved beads, too rare to be duplicated.” And yet, Head Hunters was a financial failure, quickly overlooked and barely preserved. In 1947, a single copy arrived at the Field Museum after being picked out of a Chicago dumpster; these damaged and incomplete reels were re-edited by Bill Holm and George Quimby and released in 1973 as In the Land of the War Canoes, featuring a new soundtrack recorded by Kwakwaka’wakw consultants at the time. At some point, a few deteriorating clips from another copy found their way to the UCLA Film & Television Archive, and the all-but-forgotten score was filed under another name at the Getty Research Library. 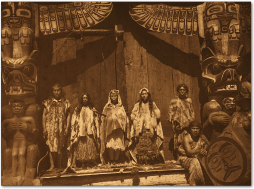 Today, we are privileged to present a restored copy of In the Land of the Head Hunters, reunited with its original orchestral score and informed by descendants of the original Kwakwaka’wakw cast. This event is significant for a number of reasons. Since the 1970s, Curtis’s film has been treated as a documentary, adorning the halls of natural history and anthropology museums and being criticized for its staging of savage scenes from a “pre-contact” past as if they were part of the everyday life of contemporary tribal communities (as was also the case with his photography). Yet the film was intended as an innovation in feature film—one meant to stand out in the already crowded field of popular Westerns or “Indian Pictures” of the time—because of its exclusive use of “authentic” Native actors, its on-location shooting, its dynamic camera work, its spectacular color tinting and toning, and its ambitious musical score. The film truly represents an active, artistic collaboration between two dramatic traditions: the rich Kwakwaka’wakw history of staged ceremonialism and the then-emergent mass-market colossus of American narrative cinema. 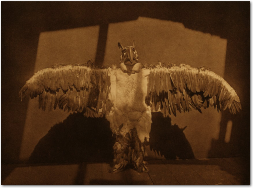 Rather than documenting Native life in 1914, Head Hunters documents a moment of cultural encounter between Curtis and the Kwakwaka’wakw actors and consultants who were performing Curtis’s scripted version of their own past for the camera. Some aspects of the film do accurately depict Kwakwaka’wakw culture, such as the artwork and many of the ceremonial dances. Others include forms of technology—the plank houses, cedar bark clothing, and massive dugout canoes—that were clearly recalled but in waning use in 1914 as people adapted to Euro-Canadian life. The most sensational elements of the film—the head hunting, sorcery, and handling of human remains—reflect much earlier practices that had been long abandoned, but which became central elements in Curtis's spectacularized tale. And some activities were never part of Kwakwaka’wakw culture. For example, Curtis borrowed the whaling practices (and the rented whale!) from neighboring groups for what seem to be purely dramatic and cinematic reasons. 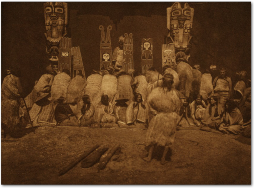 Even more noteworthy than Curtis’s embellishments, though, is the film’s portrayal of actual Kwakwaka’wakw rituals that were prohibited in Canada at the time of filming under the federal Potlatch Prohibition (1884-1951), intended to hasten the assimilation of First Nations. Despite this legislation, the dances and visual art forms—hereditary property of specific families—were maintained through this period and transmitted to subsequent generations, including the performers associated with this project. An extension of their previous engagement with international expositions, ethnographers, and museums, the film in part helped the Kwakwaka’wakw evade the potlatch ban, maintain their expressive culture, and emerge as actors on the world’s stage. By adapting their traditional ceremonies for Curtis’s film while refusing to play stereotypical “Indians,” the Kwakwaka’wakw played a vital role in the development of the most modern of commercial art forms—the motion picture.

Like his photographs, Curtis’s film was originally meant to capture a “vanishing race.” Instead, when resituated within the history of motion pictures and framed by current Kwakwaka’wakw perspectives, this landmark of early cinema can be recast as visible evidence of ongoing cultural survival and transformation under shifting historical conditions. For nearly a century and counting, In the Land of the Head Hunters has constituted a filmic lens through which to reframe and re-imagine the changing terms of colonial representation, cultural memory, and intercultural encounter.